Chapter 9 bankruptcy is a lesser known bankruptcy option that applies specifically to counties and municipalities. This also may include:

Chapter 9 bankruptcy works with municipalities and counties to reorganize debt. It offers a number of helpful debt management options, such as extending the repayment timeline, refinance of debt or for reduction of principal or interest on existing debts. Unlike what happens in a Chapter 7 bankruptcy case, the assets of a municipality are not liquidated under Chapter 9 bankruptcy filings. Instead, the Chapter 9 option provides financially distressed municipalities with protection from creditors by creating a plan between the municipality and its creditors to resolve the outstanding debt. Liquidation cannot be forced in the Chapter 9 process because municipalities and counties follow state law, whereas US bankruptcy courts are governed by Federal law.

So what exactly are the eligibility requirements for Chapter 9 filings? In order to qualify for Chapter 9, municipality entities must: 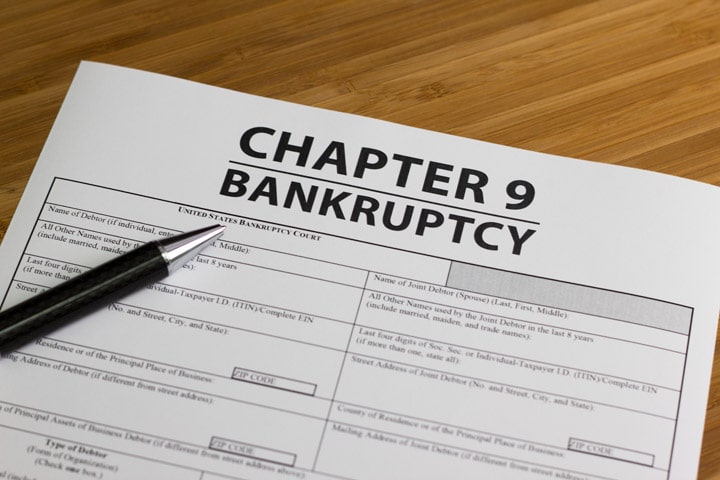 The decision to file Chapter 9 is not made quickly. This is due toone of the requirements including making an effort to negotiate with creditors prior to filing Chapter 9. A county or municipality entity may spend anywhere between a few months to multiple years in negotiation efforts. Once Chapter 9 is filed, an automated stay is enacted for the debtor that restricts all collections activities.

Chapter 9 bankruptcies are not always effective: less than 70% of the Chapter 9 filings result in a confirmed plan of debt adjustment. Examples of Chapter 9 filings in the US include a 1994 filing by Orange County, California, in the amount of $1.2 billion. In 2013, Detroit made history with their Chapter 9 filing, carrying an estimated $18.5 billion debt, making it the largest municipal debt to ever be considered by the courts.

The Steps of a Chapter 9 Filing

All Chapter 9 filings are public record, just like other bankruptcy filing options.

While Chapter 9 is a rare bankruptcy filing option that does not follow all Federal laws, it is one that has been around for almost 100 years, and one that has been utilized by public municipality entities that need debt relief. Since counties, municipalities, healthcare systems, and school systems face the challenges of providing public services and need to accommodate the changing needs of their communities, it happens that they incur amounts of debt that can end up paralyzing part of their key operations. The Chapter 9 option can help them work out of that debt in an organized and transparent way.